BETWEEN LAND AND SEA

Being in Valle d’Itria and Salento means that you are in the easternmost part of Italy. An unforgettable on-the-road experience from the Adriatic to the Ionic awaits you. Traversing art cities like elegant Lecce and white Ostuni or living in the enchanted villages of the Itria Valley.
These places tell ancient stories about people, religion, tradition and tastes. All the itineraries are different because this land calls you in a way that touches your soul. There is no such thing as one Puglia, one Valle d’Itria or one Salento. Instead, the region is made up of infinite layers that reveal themselves slowly to you.
Just like the beauty you will find behind every corner on your way.

OSTUNI
With its still expanses of olive trees as far as the eye can see, the white shapes appear on the horizon. This is Ostuni, “la città bianca”. Its elegance comes from a rich history.
A series of levels, staircases, small roads, alleys and arches. Hints of the middle Ages are evident in every corner, in every view of the sea, in the portal of a palace, in the walls of a convent or the front of a church.
A lively city, especially in summer nights, when the sunset is like an alarm that wakes the city up. The small roads are filled with strolling people or those sitting in the street to enjoy a glass of wine.
Discovering Ostuni is a trip in culture and taste in a city waiting to reveal its most intimate parts.

LOCOROTONDO
It is officially one of the Borghi più belli d’Italia, the most beautiful villages in Italy. As well as its picturesque appearance the town is also known for its wine production.
Locorotondo doesn’t really have any specific tourist attractions; the town itself is the main sight. It’s just a pleasant place to spend an hour or two wandering, taking photographs and sitting at cafe tables. If you are touring by Vintage car, it makes a nice peaceful stop.
The historic part of town – the centro storico – is circular and perched on top of a hill. It’s a whitewashed maze of little lanes lined with historic buildings, some humble and faded, others retaining rather grand baroque archways and architectural details. As well as the little rural trulli houses which you can see outside Locorotondo, this area is also notable for another unusual type of building.
These are houses with pointed gable roofs – uncommon in Italy – called cummerse. You’ll see whitewashed examples of these in Locorotondo’s tightly-packed centro storico.
It’s a pretty and well-cared-for centre, with flower pots ornamenting external stone staircases and balconies. 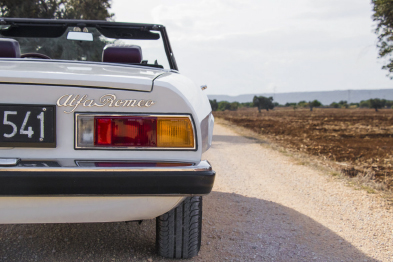 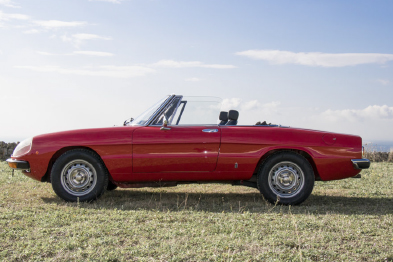 BETWEEN LAND AND SEA